The parts have arrived! It’s time for assembly.

PCB and Parts are here!

The printed boards from OSHPARK arrived recently and so did the components. Below is a list of the components I selected for this board.

Check out the images of the PCB OSHPARK made for me.

I started to build the pedal circuit and realized I did not need 100mF caps everywhere. I re-simulated the circuit with 100uF caps, and it works just fine. I started with a huge cap value just as a placeholder and never updated the schematic.

For the first build, I soldered the components on and just left fly wires hanging off. I did this so I could pump signals into it and test the circuit response. See the prototype one below.

I didn’t save my oscilloscope captures.. I will remember next time! The good news is that from 20Hz to 8kHz there was a good solid amplification with minimal change of the input signal. Driving the input harder resulted in soft-clipping, but it was very minimal and still showed a solid gain performance. As predicted in the previous post, there was an amplification of around 2-3x the input signal, resulting in a noticeable volume increase.

The second prototype is the “final product.” I stuck the circuits + inputs/outputs in the enclosure I purchased. It made for a nice looking product at the end of the day. 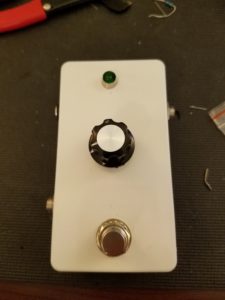 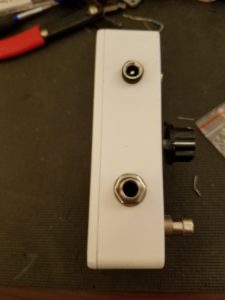 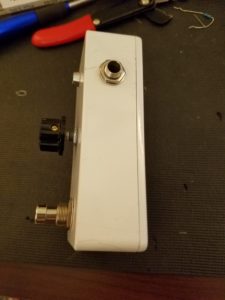 I am very happy with the results! It works and sounds great!

In retrospect, I completed my requirements. But no retrospective is complete without some lessons learned and a demo!

This example shows the clean boost aspect of the pedal. It simply boosts the volume of the signal.

This example shows the pedal driving an amp harder into overdrive and getting a nice crunchy result.

All in all, I had a great time building this pedal, and I’ll continue making more pedals in the future! Stay tuned for the next project!

This site uses Akismet to reduce spam. Learn how your comment data is processed.